On the day of a blackout, Machine Girl created a power surge.

Residents of Westwood awoke from a dark Thirsty Thursday to find their ice cream melting and their vapes uncharged — tensions were high. As the day dragged on and iPhones continued their slow death, I could almost hear the Doomsday Clock ticking closer to midnight.

In the heart of Highland Park, upper-middle class kids playing anarchist dress-up and aging nihilists feigning youth alike escaped the windswept street down a dark hall and up the stairs into the main space of the Lodge Room. There, they came upon Fantasyluv, a blue-haired, unassuming cyber-fairy sipping a Modelo and calmly mixing one of the more chaotic Eurobeat-perverse sets I’ve heard. (Here, I would like to mention my contribution to the concert: providing the bottle opener for the Modelo.)

I took in the surroundings; ornate gold trim lined the ceiling, and on each wall a painting depicting civilizations of old: Egypt, Mesopotamia, that other one. Staring vacantly at the pyramids of Giza, I asked myself how the hell we got from there to here, but my gaze was interrupted by a group of skinny boys with shirts that read: “I <3 Hole.”

A blanket of purple light flooded the stage as Johnascus trudged lifelessly into view, an androgynous husk of a fairy-tale demon. Just as quickly as the drummer smashed his cymbals, his body and his voice were possessed by an energy unique to a post-Y2K childhood of trauma; he jumped, he crawled, he contorted, all with a microphone thrust deep down his throat.

“I don’t know why everyone’s screaming, that’s bad for your voice,” he said over the throbbing, angry, slippery beat of “Shoot UP the Amazon Warehouse,” directly before emitting a scream that 4 out of 5 laryngologists would say was bad for his voice. I’m not sure who had a better time: the audience or the accompanying black-and-white jester as he writhed on the stage floor.

A flood of purple drained into a sea of red, and what looked like a rockstar from a lost era, Matt Stephenson, an artifact of anger hardly seen these days, bathed in it. Machine Girl, composed of creative leader Stephenson and percussionist Sean Kelly dove straight into the red; Kelly’s shirt was off before he smashed his first snare, and Stephenson’s stare was vacant before his first satanic verse.

Stephenson’s performance was an unstoppable force, Kelly’s drumming was an immovable object; the two collided in an explosion of anger, joy, and energy. The crowd felt just the same: to the sound of distorted, guttural, manga-influenced computer metal, kids threw themselves onto the stage and back out on top of the crowd. At one point, Stephenson yelled “Bass guitar! Where’s the bass guitar!” until it was sheepishly returned from the mosh pit below. (This moment can be viewed here in all its hilarity).

The outside world thinks that the feeling in the air at a show like this is one of rage and destruction… and this is completely accurate! There is plenty to be angry about: our democracy is crumbling before our eyes, a pandemic is entering its third year, and the oceans are rising like the vomit in the throat of the girl crushed against the stage who took one (or two) too many poppers. In this modern age, we are left to ask ourselves how close we are to the apocalypse. As if we didn’t need another reminder, sweat-stained KN95 masks that barely contained the screams from the crowd added another dimension of dystopia to the performance.

But to dismiss the sentiment in a concert like this as solely anger and frustration is to distort reality. The exhausting, sacrilegious and ritualistic performance of Machine Girl created a space where the expression of righteous anger was normalized — in doing so, a sense of elation and catharsis permeated the Lodge Room.

When the concert ended, an encore did not feel necessary; in truth, everyone was exhausted. I drove home, feeling a conflicting mix of calm following the show’s madness and anxiety in anticipation of my reentry into the burning world around me.

But when I got home, the lights were back on. 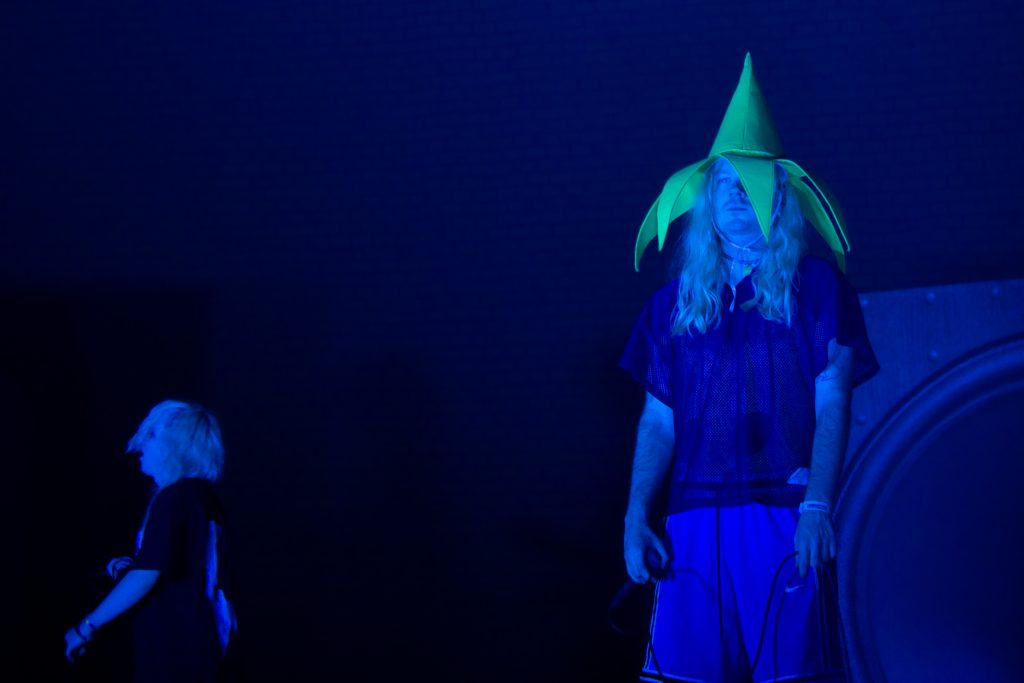