It is uncontested. 100 Gecs are the artistic and spiritual forefront of the hyperbolically modern and odd underground known as hyperpop. But becoming the established leaders of this refreshingly innovative and amoeboid movement has thrown them directly into the predictably boring stereotypes that their music opposes.

Dylan Brady and Laura Les emerged onto the stage for a crowd of thousands at LA’s Shrine Expo Hall. It felt wrong. 100 gecs are designed for the underground – to be listened to and laughed at as weird garbage but enjoyed entirely for that exact reason. The first 100 Gecs show I saw was in a cramped and sweaty little room, with the artists at the same elevation as everyone else, and right in front of us. This is how this music is supposed to be: grimy, energized, and chaotic. Instead, I found myself at the Shrine – the artists on a stage 6 feet above the crowd and separated by a metal barrier 10 feet away from it. 100 Gecs, their music, and the musical subculture they have created deserve all of the praise, fame, and love they have earned. But even so, I could not shake the idea that playing this music in this setting was wrong, and completely misaligned with the culture of hyperpop.

Dylan pressed play on his laptop. The stage exploded with colorful lights as drowning bass saturated the airwaves with muted vocals underneath. What would they play to open up the show?! Just about anything from their wild discography would make for an excellent opener to hype up the crowd. The pair bounced around the stage rapping but I didn’t recognize the song quite yet. Am I out of touch with the youth? I looked around, but the crowd didn’t seem to know the words either. They…. they opened with an unreleased song? Huh! Well, I guess we don’t get to sing along. Personally, I think kicking off the night with any released Gecs piece would have been a great way to get people locked in, engaging with the show. Even so, the artists easily energized the massive room with their even-larger presence. Laura’s movement was dynamic, and her raps were refreshingly aggressive. Dylan brought the same intensity, but with a more subdued and cryptic presence that played well to his character. The big star hat drooped over his face added further to his intrigue. Both donned stunning wizard robes surely imbued with boundless power. There is no doubt that the room was thrilled about the energy coming off of the two performers, but it was this performative act that later irked me.

“F***ing Los Angeles, how the f*** are we feeling tonight?!” “We are 100 Gecs, and we’re gonna play some songs for y’all tonight.” Laura addressed the crowd in the most stereotypical fashion possible. The autotune remained on throughout the show as she talked, making it difficult to sincerely connect with her. Dylan chimed in infrequently. Honestly, it didn’t feel like I was watching 100 Gecs. It felt like I was watching two people whose jobs were to play the characters of 100 Gecs, and their impression was hollow – only weakly comprised of low-effort stunts. Throughout the whole show, they never said anything interesting – every line was a standard “We got some more songs for y’all tonight. This is one of them.” Is this all the writers of “money machine” and “800 db cloud” had to offer? I expected some degree of craziness, or spontaneity, or some story, or really anything interesting to be said at all. But instead, we got typical addresses to a general mass of spectators.

Press play. Stupid Horse. Banger. This is 100 Gecs we’re talking about. Of course the set was electric, and full of the bona fide bangers the crowd was starving for. But each song was plagued with similar problems to their dialogue that seemed to spoil the show. Nearly every song was executed merely by pressing play, and Dylan and Laura would go through the motions of repeating the lyrics. Why were they sticking to such a preset script? The Champions of the Weird and Unexpected should have something more in store for us, but all we got was more of the same. Perhaps it’s due to their great success that they wanted to stick to what they know works. But I found this boring, and completely removed from the spirit of their music.

We were granted brief respite from this when the pair took to the floor to hammer out a tune on pieces of metal resembling a xylophone. As the rhythm progressed, it built in intensity and swelled to a grand display of Dylan and Laura slamming the instrument to pieces. This feat (and the crazed glint in their eyes as they did it) was a great example of the genuine 100 Gecs energy I felt the rest of the show lacked. This section ended with Laura snapping the sticks on her knee and throwing them out to the crowd with the swagger of every other rockstar.

Back to pressing play on songs. I noticed that Dylan had Logic Pro open with musical typing enabled. He might have used this in part of one song, but it was short lived. I really got excited when the duo pulled out acoustic guitars. Finally, we could hear them produce more than just vocals on the spot. Finally, we could hear live music. Unfortunately, this was nothing special either. Their playing was relatively dull, only picking up some intensity near the end. Laura has been playing guitar since she was 13 years old, so as she began to solo, I thought she might do some interesting things with it. Perhaps we could hear some atypical chromaticism, some interesting rhythmic elements or muting produced by a trained right hand, or even some good old nasty bends.  To my disappointment, her solo came out very boring, and surprisingly deadpan. It was a flat melody composed of few notes confined strictly within a single scale. “Gecgecgec” was the only song they played acoustically.

The next moment that filled me with false hope was when Laura donned the electric guitar – one of the driving forces of 100 Gecs’ sound. Laura’s beautiful Fender Vintera ‘60s Jaguar was supported by an army of pedals, whose whole job was to make the signal scratch and scream however she wanted them to. But no! The song began, and the guitar made no sound at all! Near the end of it, Laura adjusted things so we could hear the guitar, but unfortunately we only had little time with it. Once again, the guitar made its appearance for only that single song before departing to leave us with more prerecorded tracks.

Naturally everyone was thrilled when we made it to “Money Machine” after enduring a show saturated with unreleased music that nobody knew. Screaming the lyrics along with the artists was just as fun as we all knew it would be, and the energy in the room was at its peak for this final track. The song ends with a shrill and chaotic feedback loop that exemplifies the strange appeal of 100 Gecs. It embodies the whole craziness and excitement and tenacity of their brand. To my horror, they did not generate the feedback live despite having the tools to right in front of them. It didn’t have to match the recording. They could have done anything. They could have improvised it. They could have let static screech for minutes as they made it up on the fly. They could have mashed on pedals and just had fun with it; but instead, we got nothing. There was no heart, no soul. Just let the recording play, and now we’re done. Wow, that was a knife in the gut.

I want to acknowledge that Dylan and Laura put some good energy and some lovely screams into many of the songs they performed that night. But unfortunately, it was hard to invest fully in the show. A very large fraction of the setlist was songs from their unreleased album, “10,000 Gecs,” which no one in the crowd could possibly know, and frankly these songs were not as exciting as their released work. It almost felt like they were trying to advertise the new album live because they know it is less exciting than any of their prior music. Playing unreleased music is exciting for fans, but when it becomes the whole show, there is not much left for us to latch onto.

Being 100 Gecs is a lot to live up to. With that weight on their shoulders, I can see how meeting expectations can be difficult, or how they might want to play it safe and not step too far outside of the box. But this is the whole essence of 100 Gecs, and watching them become the most boring parts of performances by typical, popular artists was painful for me to watch. The music was there, but the show and their personas lacked the unique spunk that we love them for so much. It was like watching your dad’s favorite classic rock band lip sync modern songs: just sad. I know deep in my heart that 100 Gecs can align their stage presence with their fantastic art in future shows. Let us all just hope that they do. 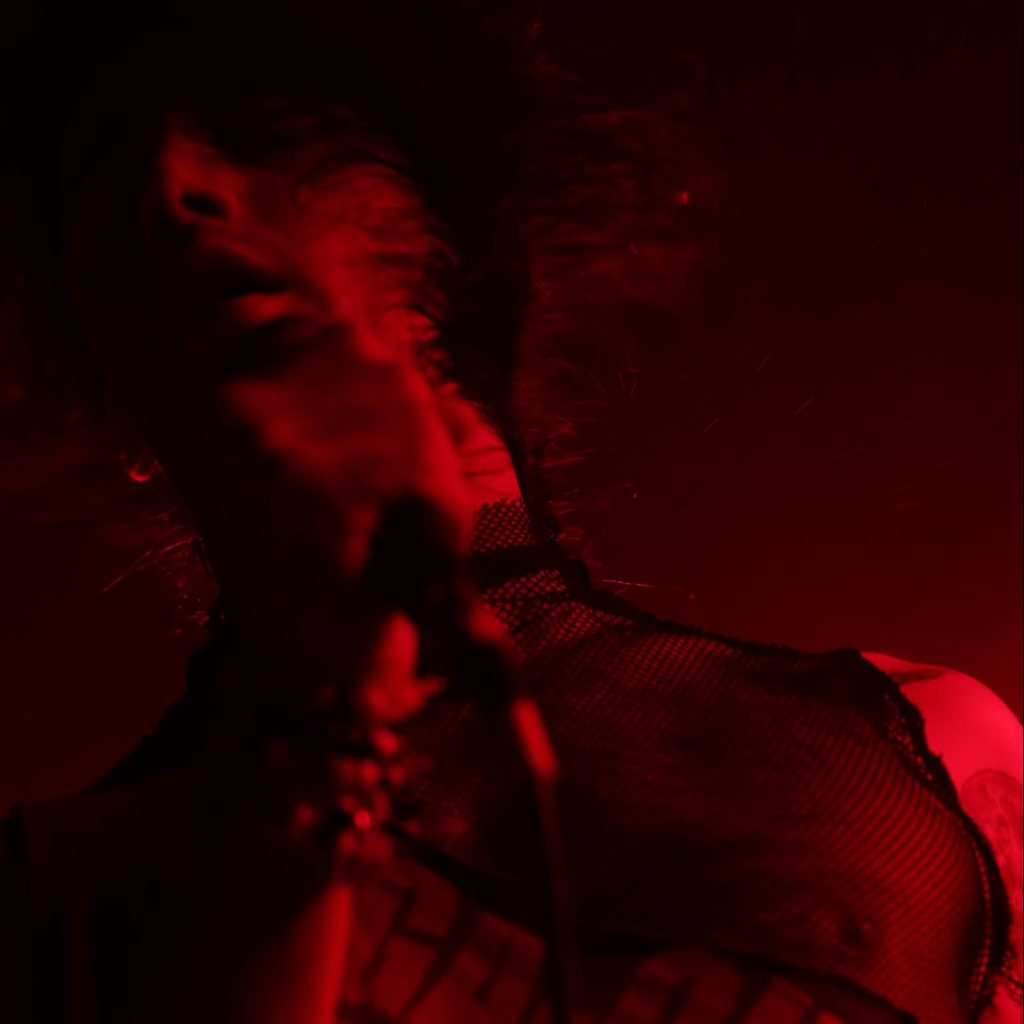 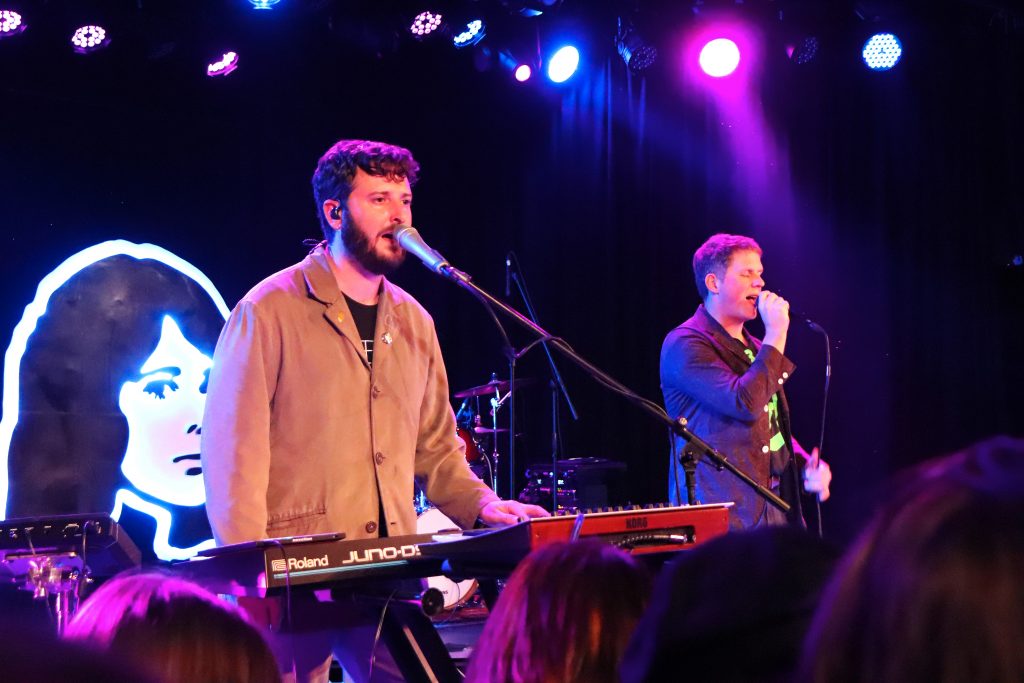