Even blocks away, it was near impossible to miss the neon glow pouring from the blue and red letters of “The Wiltern.” Towering over all the surrounding streets, the iconic Old Hollywood style theater held a presence that almost demanded to be known – a presence further amplified by the never-ending stream of concert-goers filtering into the venue. Above the mixed jumble of eager conversation and frantic security, an all-caps sign announced: “THE BACKSEAT LOVERS / SOLD OUT.”

With that, my expectations for the night solidified before even walking in.

While it was only last March when I had first seen The Backseat Lovers, I pounced at the opportunity to see them for the second time. After all, with LA being only one of a few U.S. stops on their world tour, how could I pass on the chance to hear their newly-released sophomore album, Waiting to Spill?

Hailing from Provo, Utah, the band consists of lead vocalist Joshua Harmon, drummer Juice Welch, lead guitarist Jonas Swanson, and bass guitarist KJ Ward. While I, along with most kids at the age of 18, were stressing over dreaded college apps and AP exams, the four teenagers instead decided to take a chance at making music. Crediting their humble origins in their first-ever 2018 single “Out of Tune,” Harmon sings of how they were “just a couple of posers with guitars” who “started a band without a drummer or a mic.”

Knowing just how far they’ve come, I eagerly entered the venue. Immediately, I was transported from the bleakness of Downtown LA into a lavish Art Deco world, reminiscent of decades past. While eclectic, the turquoise terracotta adorning the ceiling felt as a fitting companion alongside the theater’s towering golden pillars. As I merged perfectly with the predominantly college-aged crowd, I felt a young energy so palpable it nearly appeared alongside the blue stagelight glow.

The lights finally dimmed, and the much pent-up excitement erupted into screams. The opening act, a two-man band named Toledo, made their way onto the stage. With nothing but a guitar and a drumset between them, the band exuded a laid-back energy, reflected in their lighthearted conversations as they remarked how “cool everyone was.” As they performed indie-folk songs like “Sunday Funday” and “How it Ends,” the audience swayed to the slow tempo of each verse.

While Toledo imparted a relaxed mood, their calm energy was hardly enough to stifle the audience’s growing anticipation. Fans rushing back from snack breaks and merch shopping quickly packed into an already-full venue, eagerly awaiting for the clock to read 9:00pm.

Golden lights suddenly illuminated the theater, adding a soft yellow glow around The Backseat Lovers as they walked onto the stage. Though I had arrived hours before, as I heard the crowd collectively roar in adoration, this moment felt like the real start of the night.

There was a fitting simplicity as the band settled into place. While I remember a vibrant stained-glass setup from their previous concert, they instead opted for a plain backdrop this time. Supplementing this were hypnotizing projections and stage lights that followed their exact movements, putting the ultimate focus on them rather than their surroundings.

The centerpiece of the night was Waiting to Spill, as The Backseat Lovers played all ten album songs consecutively. Opening with “Silhouette,” the band floated soft guitar and piano notes through the crowd, as Harmon smoothly projected his distinctly raspy voice. Echoing the words “stay” and “run,” his siren-like sound entranced the audience.

What began as a slow blue serenade built up into a vibrant burst of red and orange, with the flashing stage lights and pulsating drum beats matching the song’s increasing pace. Thousands of concert-goers moved as one, jumping and bobbing their heads to every shift in sound.

Plucking the last guitar notes, the crowd responded with deafening hollers and claps. As it sunk in that I was hearing their new album live, I felt shocked to hear a band so young sound so thoroughly developed. Though “indie-rock” is an often-cited term to describe their music, such a title is an oversimplification to say the least. Seamlessly blending classic rock elements with softer folk notes, the band’s style is reminiscent of artists like The Beatles, Radiohead, and Cage the Elephant.

However, that is not to say they are merely a product of others. Curating a powerfully electric energy through their guitar and drum-led style while simultaneously weaving together dreamy piano-dominated melodies, The Backseat Lovers doesn’t just welcome the challenge of balancing juxtaposing elements – they run towards it. In the process, one thing is clear. Their voice is uniquely their own.

As they performed “Close Your Eyes” next, it became evident that Waiting to Spill is a marked departure from the teenage innocence painted in their first album, When We Were Friends. Belting out the lyrics “time keeps telling me to change, but I’m fragile and afraid,” Harmon echoes his fears of saying farewell to his childhood. My personal favorite, “Growing/Dying,” further perpetuates this theme as he braces himself for adulthood while declaring how “it would be nice to know when I decide to grow.”

Harmon displays raw emotion in every lyric he sings, equally reflected in the audience as they repeat back every single word. As he transitions from quiet solos to powerful ballads, the electrifying synth of the guitar follows each note, seamlessly moving between slow and fast tempos. Closing off the show’s Waiting to Spill section with softer melodies from “Viciously Lonely,” the band then transitions to the more lively hits from When We Were Friends.

Garnering lively dancing and echoing screams, The Backseat Lovers hosted a personal bacchanal. They paired songs like “Pool House” with vibrant patterns of ruby and emerald, enveloping the audience with rainbows of color after each beat.

Following this was “Kilby Girl,” the hit song that brought them into the limelight. I’m neither 19, nor do I have a fake ID or a nose ring. Yet, as I entrancingly watched The Backseat Lovers perform, I couldn’t help but imagine myself as the mystery girl the band daydreams about “wasting the whole afternoon away” with. The audience’s energy worked in tandem with the band’s. As Harmon danced around the stage and grooved his body alongside his band members, the crowd made sure to follow suit.

Abruptly, The Backseat Lovers then end the show. Harmon thanks the audience for having them as they pick up their equipment and file out. The lights dim, signaling everyone to leave. Yet, this sudden shift only seems to further provoke the concert-goers. Stubbornly shouting “ENCORE” to a dark stage, the crowd patiently waits, all knowing that this exit was merely a performance tradition.

Several minutes pass, until suddenly, the golden lights return. The audience erupts into excitement as The Backseat Lovers reappear. Joking about how determined the crowd is, the band played “Sinking Ship” and – to everyone’s surprise – an impromptu performance of their earliest song “Out of Tune.”

As the final guitar strum echoed into the air, nothing felt like a more fitting ending than an homage to their beginning.

Taking the Night Shift with Lucy 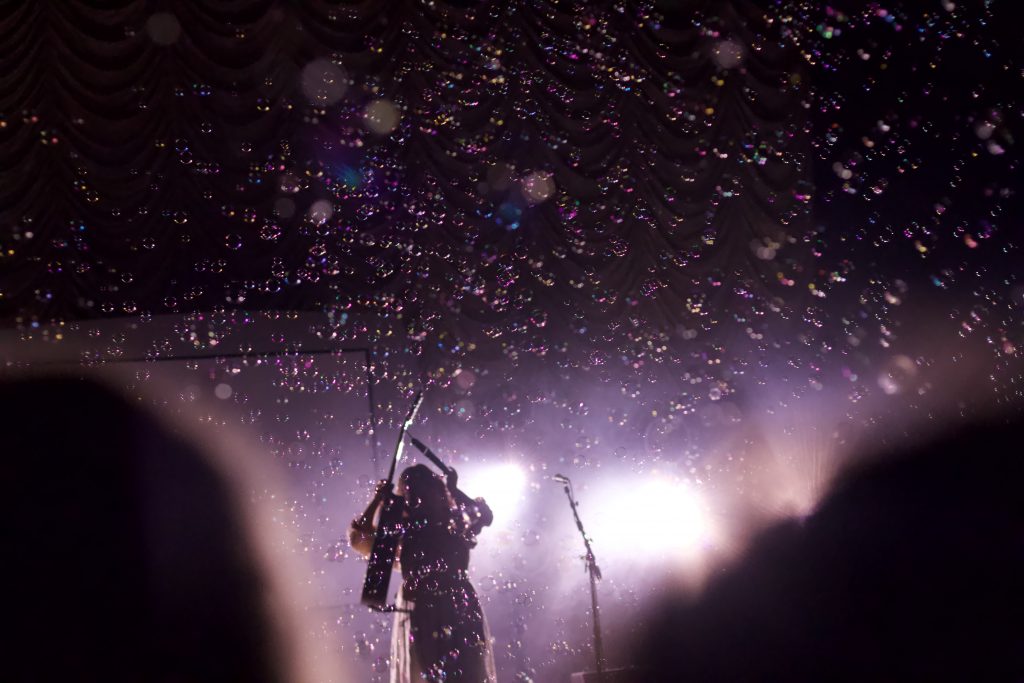